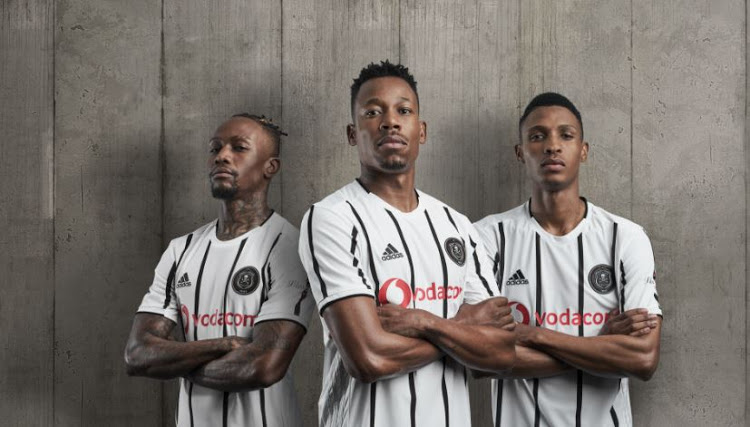 Battling Kaizer Chiefs have been accused of trying to hypnotize opponents with their busy‚ striped new jersey for the 2019-20 season‚ while Orlando Pirates’ kit’s detractors have said their new shirt looks like a WWE referee’s top.

Mamelodi Sundowns have launched‚ as they do most seasons‚ the social media jokesters say‚ basically the same jersey.

But who of the big three‚ who all launched their new season jerseys on Monday and Tuesday to a mixed reaction and the usual dose of jibes from opposition supporters‚ has won the battle for the best strip of 2019-20?

Perhaps a strategy by Chiefs to end an unprecedented four-year trophy drought by mesmerizing their opponents with their garish‚ busy‚ striped patterns splashed across the front of their new jersey.

Amakhosi’s new gold home kit‚ with striped patterns melding into each other like a tiger being put through a blender has already drawn comparisons with their not overly popular “Zebra” kit worn between 2011 and 2013.

It seems strange Chiefs will have harked back‚ and reworked‚ a jersey that never really took off among their supporters‚ even if they did win a league and cup double wearing it in the 2012-13 campaign.

Their white away kit‚ with gold arms striped in black‚ has been met with far greater acceptance so far.

If the Zebra can canter to some trophies though‚ fans will surely be happy with anything their players will be wearing.

Orlando Pirates is bigger than Sundowns as a brand! Pirates release a new Jersey, Pirates is trending but Sundowns is not! Yes, Sundowns have had better success on the pitch than Pirates but pirates remain a bigger club!
Game over to the rival these sundows fans try to create!

When Pinky asked The Brain in the Animaniacs cartoon series what they would do “tonight”‚ the response was always: “The same thing we do every night Pinky – try to take over the world.”

Sundowns’ ambitions are less grand at present – to try to take over Africa by putting a second star over their badge and adding a second Caf Champions League title to their 2016 one.

Though once they do that‚ they will surely then set their sights on the Fifa Club World Cup.

But when it comes to jerseys‚ Sundowns are like Pinky and the Brain in many ways – they do the same thing every season as they did the last.

Still, ‚ Downs’ safe betting on an already beautiful kit that is now recognized across the continent thanks to their Caf Champions League exploits still ranks above Chiefs’ seeming over-thinking of the thing.

Opposition fans have tried to deride Bucs’ new white jersey with thin black horizontal stripes that harks back to their kit winning the 1995 Caf Champions Cup as looking like that of a WWE (World Wrestling Entertainment) referee’s top.

Their bright red away kit is striking too.

We have yet to see a black jersey released.

Perhaps Bucs have a surprise in store for Saturday’s preseason friendly Carling Black Label Cup against Chiefs at FNB Stadium?

If it’s as stylish as the other two‚ Pirates are onto a winner in the fashionable sense.

The question is whether coach Milutin Sredojevic and his star-studded squad can now finally deliver enough winning on the field to end a trophy drought stemming back to 2014.